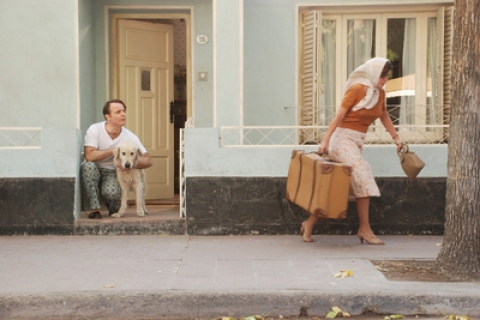 Asleep in the Sun

Asleep in the Sun

It’s the 50’s and Lucio Bordenave, a watchmaker, has a quiet existence in a Buenos Aires neighborhood called Parque Chas, an area where the streets have no corners and are conformed by circles like a labyrinth. One day, without clear reasons, his wife Diana is committed to a disturbing “Health Institute that cures special people”. Bordenave suddenly finds himself involved in a unlikely series of events: the intrusion of his sister-in-law that wants to seduces him, the interviews that he holds with the confounding director of the mental Institute, Dr Samaniego, the appearance of a dog suggestively called Diana, and the progressive and unavoidable awareness that a strange traffic of souls is taking place around. Based on the novel by Adolfo Bioy Casares.


Was born in Buenos Aires, Argentina, in 1968. Graduated with a master’s degree in Film Directing in NY. After directing, writing and producing nine short and medium length films, Alejandro wrote and directed his first feature film, Today and Tomorrow (2003, 27th Mostra). Asleep In The Sun (2010) is his fourth film as director.