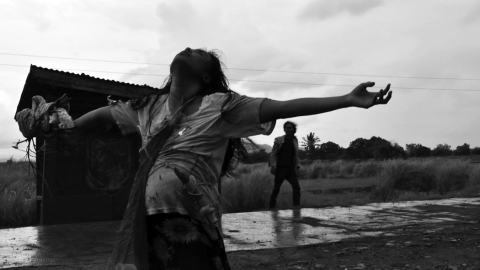 "A Christian cult led by the forceful Father Tiburcio chants while baptizing new members. A cynical photographer observes the group and thinks about how to destroy it. Meanwhile, a filmmaker named Homer sits at his editing table, taking breaks to talk with an actress about his struggles to finish a film that might resonate with common people. Scenes from Homer’s film sometimes appear showing a nun and a criminal, both of who seek to redeem themselves. All these stories intersect, overlap, and enter into dialogue with each other, in ways explicit as well as implicit.


This is one of Diaz’s most troubled, self-investigating films. In it, art is equivalent to religion, with both the filmmaker and the cult leader holding responsibility to potential followers. Neither practice is made out to be better than the other—both can be used for good as well as for evil. It is rather up to people to decide what right and wrong are, and how to use their capacities for each.
"