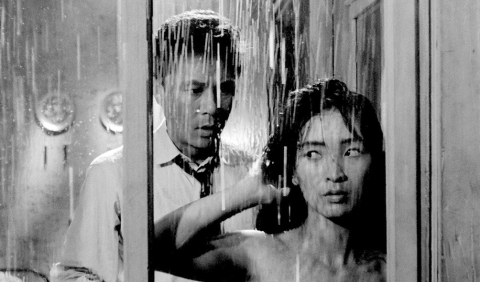 "Dong-Sik Kim, a piano teacher, has just moved into a two-story house with his wife and two children. When his pregnant wife becomes exhausted from working at a sewing machine to support the family, the composer hires a housemaid to help with the work around the house. The new housemaid behaves strangely, catching rats with her hands, spying on the composer, seducing him and eventually becoming pregnant with his child.

Widely considered to be one of the best Korean films of all time, The Housemaid was digitally restored by the Korean Film Archive (KOFA) with the support of the World Cinema Foundation and the print granted by the Fondazione Cineteca di Bologna." 
Born in Seoul in 1919, he spent part of his childhood in Japan where he discovered film and the theater. Kim found employment making propaganda films for the United States Information Service. In the 1950s, he started producing popular melodramas. His films met with some commercial and critical success, but his style did not fully mature until The Housemaid (1960). Despite a sharp increase in government censorship during the 1970s, Kim continued to make films, including Insect Woman (1972) and Iodo (1977). He influenced current South Korean filmmakers such as Kim Ki-duk, Bong Joon-ho, Park Chan-wook and Im Sang-soo, who directed a remake of The Housemaid in 2010. He died in 1998 in a fire in his house.