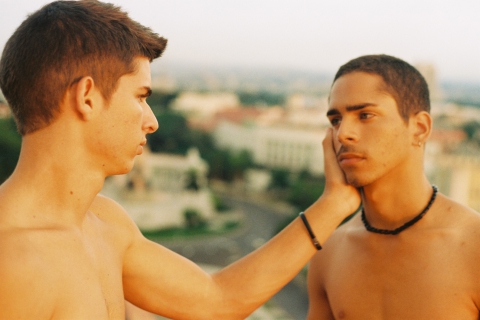 "Early nineties in Tbilisi, the capital of the newly independent Georgia after the collapse of the Soviet Union. The country is facing violence, war on the Black Sea coast and vigilante justice that plague society. But for Eka and Natia, fourteen-year-old inseparable friends, life just unfolds; in the street, at school, with friends or the elder sister. Although they are already dealing with men’s dominance, early marriage and disillusioned love, for these two girls in bloom life just goes on." 
Born in 1978 in Tbilisi, Georgia. Studied dramatics and script writing at the filmschool in Potsdam-Babelsberg, Germany. She directed the short film Waiting for Mum (2011). In Bloom is her first feature film. 
Born in 1976 in Berlin, Germany. Studied film directing at the Film and Television School in Munich, Germany. After directing short films like Fall of Man (1998) and Elated by Night (2001), he directed his first feature film Fata Morgana (2006). In Bloom is his second feature film.