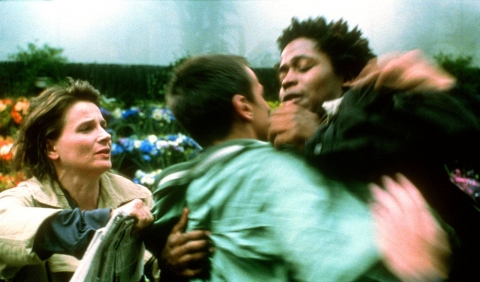 Director Michael Haneke, who made Funny Games, a film that cuts deep, turns his camera on the streets of Paris. In a busy street in the city, someone throws a crumpled piece of paper into the outstretched hand of a beggar. For one instant, this is the link binding the trajectory of divers characters. Anne is a young actress about to start out on her career in cinema. Her boyfriend, Georges, is a war photographer rarely in France. Her father owns a farm, and her younger brother, Jean, shows not the slightest interest in taking over the business. Amadou is a teacher of music in an institute for deaf-mute children. His father is a taxi driver who has come from Africa; his younger sister is deaf and it is because of her that Amadou has opted for his profession. Maria is from Rumania and sends the family any money she comes by begging. She is deported and meets with difficulties in her country, all of which leads her to embark on yet another humiliating journey to France.The film follows on with the story of these characters and of the persons that cross their path. Their encounters are brief. They would seem to have nought in common, other than the "code unknown" that binds together their different paths.