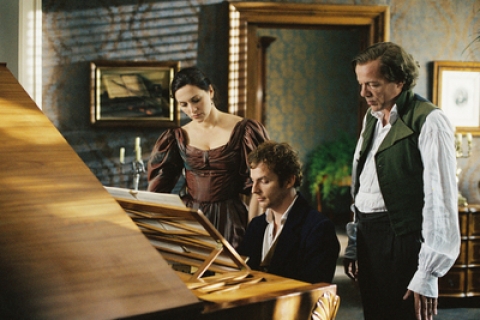 In 1850, Robert Schumann and his wife Clara travel to D√ºsseldorf where he will start his position as musical director. Those years turn out to be an unhappy time for the resourceful musician who sees himself more as a composer than a conductor. In D√ºsseldorf Clara makes the acquaintance of composer Johannes Brahms who is 14 years her junior and they fall for one another. After Robert Schuman?s failed suicide attempt, he commits himself to a sanatorium in the year 1854. The relationship between Brahms and Clara Schumann grows even more intense. When Robert Schumann dies at the sanatorium two years later all obstacles seem removed for them, but she takes a stand about a new relationship.


Was born in Emden, Germany, in 1940. Studied Music and Theatre in Hanover, Germany. In 1970 she founded her own film production company, devoting her attention to documentaries as well as to fiction films. She directed several feature films, amongst them Under the Pavement Lies the Beach (1975), Heinrich (1977), Germany Pale Mother (1980, 5th Mostra), Laputa (1986), Appletrees (1992) and Colour of Soul (2003).