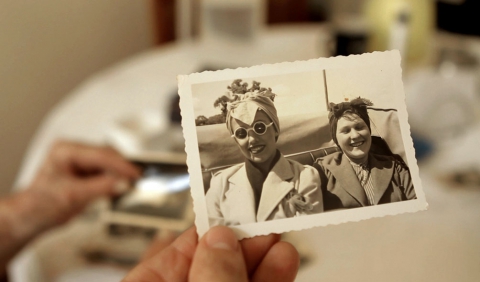 Vida, a Young Eslovenian woman, arrives in Brazil on the eve of the start of the 2nd Great War. She is alone, single, and has left her family and the love of her life with the promise to come back in a year. Unable to return, she builds a new family and a new life in Brazil. The former young woman is the director’s grandmother who, 73 years after her arrival in the country, returns to Slovenia with her granddaughter. But the journey they travel, as well as their families and the film’s journey, is of other nature: subjective, emotional and poetic. A trip that struggle to retain volatile memories, revive feelings and discover what lurks in our souls.


Born in São Paulo, she studied cinema at FAAP. Since 1992, she has been working with cinema and advertisement. She started her career as an assistant of direction working in feature films such as Alain Fresnot’s Ed Mort (1996). She has worked in the production company O2 Films and directed the short film Coisa de Criança (2001). Currently, Villela works as a director, developing mainly documentary projects. Vida is her first feature film as a director.