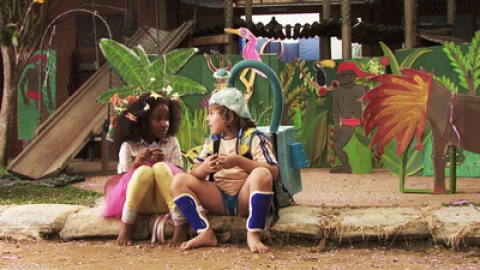 THEN AND NOW : BEYOND BORDERS AND DIFFERENCES

The 34th São Paulo Film Festival will be housing the Then and Now : Beyond Borders and Differences project, a collection of short films made by NGO Art of the World in partnership with the SESC São Paulo.

Then and Now brings together shorts produced in various countries, all concerned with the same theme: the interaction between different religions, cultures, and nations. The project relies on the support of the UN and calls upon independent filmmakers in an attempt to create stories that develop platforms of dialogue between different cultures.

The SESC São Paulo supported the production of one of the project’ films, Carnaval dos Deuses, directed by filmmaker Tata Amaral. The film tells the story of Ana, a girl who watches as three of her friends make their carnival costumes, but doesn‚Äôt take part because she considers the festivities sinful.

The project also present the short film Chimères Absentes, directed by Fanny Ardant, a legendary French actress who had her directorial debut in 2009 with the feature-length Ashes and Blood (33rd São Paulo Film Festival). In the film, we follow Sonietcka, a gypsy girl forbidden from having lunch in the school cafeteria with her friends.

Also participating in the selection is Iranian filmmaker Jafar Panahi’ The Accordion. The director, arrested in March for opposing President Mahmoud Almadinejad and kept in prison for two months, was forbidden from leaving his country and could not appear at his short film’ presentation at the Venice Film Festival in September of this year.

Short films from the THEN AND NOW project to be screened at the 34th São Paulo Film Festival: