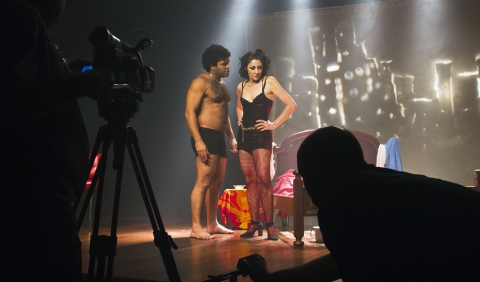 A dive into the life and work of Plinio Marcos, one of the greatest names of Brazilian drama. Author of plays about the margins of society, including Dois perdidos numa noite suja (1966) and Navalha da Carne (1967), his work defied the censorship imposed by the military dictatorship. Through films, poems, plays, testimonials, music and interviews, an artist who was known for the audacity in the creation of his characters, for breaking paradigms and the restlessness libertarian and transforming attitude is revealed. Featuring actors such as Tonia Carrero, Vera Fischer, Glauce Rocha, Jece Valadão, Emiliano Queiroz, Nelson Xavier, Sergio Mamberti and Walderez de Barros.


Born in São Paulo in 1941, he is a director, actor and producer. In 1964, he started his career at the Teatro da Oficina and Arena. He worked as Geraldo Sarno’s assistant in the documentary Viramundo (1965), both as an actor and producer in Rogério Sganzerla’s The Red Light Bandit (1968), and directed the film Longo Caminho da Morte (1974), selected for the Locarno Film Festival, which he couldn’t attend because of the censorship at the time. He was in the cast of, among others, Carlos Reichenbach’s Filme Demência (1986), and Guilherme de Almeida Prado’s A Dama do Cine Shanghai (1988). He is the creator of film exhibitions such as Cinema de Invenção and Cinema Negro. More recently, he directed Vinte Anos Sem Gonzaquinha, short made for the Calouste Gulbenkian Foundation, in Lisbon.