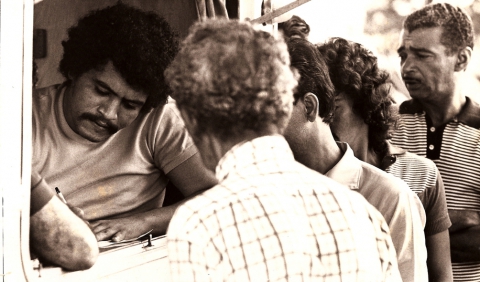 A documentary about the trajectory of Brazilian journalist Arcanjo Antonino Lopes do Nascimento – best known as Tim Lopes – who left Rio Grande do Sul when he was still a child to live in Rio de Janeiro. Seen as one of the greatest Brazilian investigative reporters, Tim is admired and respected for his singular way of making journalism. Through reencounter with friends, work mates and subjects of his stories, his son Bruno goes through unpublished stories of Tim’s life.


A cinematographer and filmmaker, Azevedo is responsible for the cinematography of documentaries such as Thiago de Mello – 70 Anos de Amazônia (1998), Ecos do Brasil (2010), which rescues the environmental history of Brazil, and for the TV series O Brasil é o Bicho (2007). In the field of journalism, he worked in news coverage for the TV program Fantástico (TV Globo).