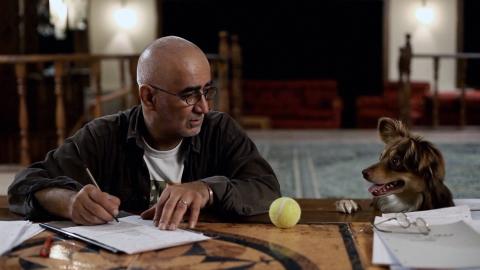 They are both on the run: the man with the dog he isn`t allowed to own because Islamic law deems it to be unclean, and the young woman who took part in an illicit party on the shores of the Caspian Sea. They barricade themselves into a secluded villa with curtained windows and eye each other suspiciously. Why has he shaved his head? How does she know he is being followed by the police? They are both now prisoners in a house without a view in the midst of a hostile environment. The voices of police can be heard in the distance, but so too can the calming sound of the sea. Suddenly, the director enters the scene and the curtains are pulled open. An absurd situation is settled: two characters from a screenplay, both searching for and observing their director. 
Born in Minaeh, Iran, in 1960. He studied film and TV directing in Tehran. He was Abbas Kiarostami’s assistant director in Under the Olive Trees, winner of the Critic’s Prize at the 18 th Mostra). The White Balloon (1995, 19 th Mostra), his first feature film as a director, was awarded with the Golden Camera at the Cannes Film Festival. He has also directed titles such as The Mirror (1997, 22 nd Mostra, in which he was also member of the International Jury), The Circle (2000, 24 th Mostra), winner of the Golden Lion at the Venice Film Festival, Crimson Gold (2003, 28 th Mostra), winner of the Silver Bear at the Berlin International Film Festival. In 2010, he was convicted to six years in prison and was forbidden to film or leave Iran for two decades under the accusation of to do advertising against Iranian government. One year later, Panahi directed This Is Not a Film, shown at the 35 th Mostra and awarded with the Silver Bear for best screenplay at the Berlinale. He also signed the direction of Closed Curtain (2013, 37 th Mostra) and Taxi Tehran (2015). 
Born in 1955, Iran. He studied theatre and then began writing screenplays for television shows. He made his feature film directing debut in 1986 with Golnar, wrote the screenplay for Jafar Panahi’s The Circle (2000, 24th Mostra) and directed the feature film Café Transit (2005).