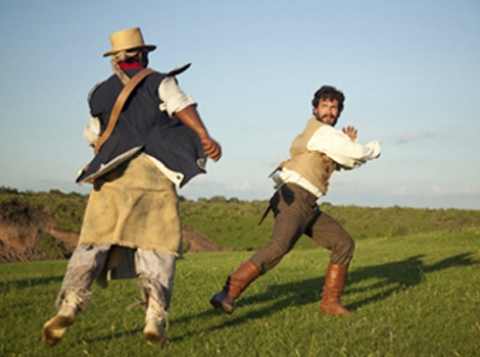 In 1884, Blanes, a famous Uruguayan painter, is given the task to give shape to the face of a legend: Jose Artigas, the country’ emancipator, the man that leaded an organized popular army in the countryside of Uruguay. Blanes only clues are given by the drafts of Guzman Larra, a Spanish spy that was hired to kill Artigas 70 years before. When the destinies of these three men meet, a new meaning is given to their lives and that of their people. 
Was born in Montevideo, Uruguay, in 1958. He studied cinema in São Paulo in the 70’s and has started his career in Brasil as assistant of photography of Dib Lutfi and Mário Carneiro. In 1975, he started working as a cinematographer in documentaries and advertising films, as well as features by directors such as Roberto Gervitz (Feliz Ano Velho, 1987), Sérgio Rezende (Doida Demais, 1989) and Murilo Salles (How Angels Are Born, 1996). In 2007, he moved permanently to Brasil. Is the cinematographer of features such as Fernando Meirelles and Kátia Lund’s City of God (2002), and Meirelles’ The Constant Gardener (2005) and Blindness (2008); Spike Lee’s Sucker Free City (2004); and Gonzalo Arijón’s Stranded: I`ve Come from a Plane That Crashed on the Mountains (2007, 32th Mostra). Has directed the medium-lengh documentary Cuando Sea Grande (1980) and the feature The Pope’s Toilet (2007), co-directed with Enrique Fernández and awarded with the Jury Prize at the 31st Mostra.