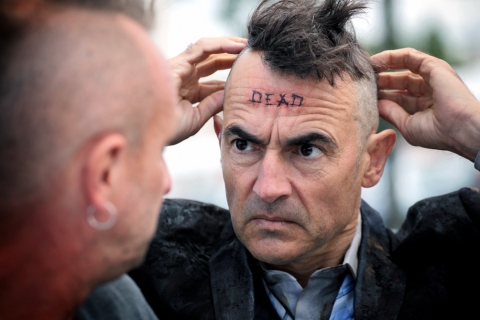 "The accused: Murat Kurnaz, who wanted to give meaning to his life by turning to Islam and going on a pilgrimage to Pakistan right after 9/11. The accuser: American government interrogation specialist Holford, who pulls all the stops of manipulation and fear in order to obtain a confession from Kurnaz. But Kurnaz can’t confess; he’s innocent. Based on the true story of the German Turk who spent a total of five years as a US prisoner in Afghanistan and Guantánamo, the film is a chronicle of unimaginable abuse and a duel between two personalities."


Born in Munich in 1982. He took his first steps in film and television as a script developer in Berlin. His short films include Bösse Bilder (2007), Der Zweite Bruder (2007) and Kabul ist Kein Krieg (2011). He also directed the medium-length film Jedem das Seine (2009). Five Years is his first feature film.