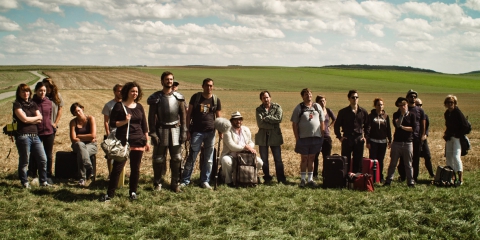 Deep in the Bavarian countryside Heinrich von Kleist`s historical drama Michael Kohlhaas is being shot. But instead of shooting a huge epic with impressive costumes, grown-up men in blue overalls and suits run through the woods and fight with imaginary weapons. The young director Lehman is fighting for his vision, for his film, although all funds have been cancelled after the first day of shooting. With enthusiasm Lehmann appeals to the imagination of his team. But negative voices arise and it all seems to get out of control. 
Born in Wuppertal, Germany, in 1981, he grew up on the Bavarian countryside. After his final degrees, he moved to Berlin where he worked for several TV production companies before starting his film directing studies in Potsdam-Babelsberg. He has directed short films such as Liebe Gemeinde (2008) and Gerhold Selle – Rentner (2009). Kohlhaas - Or the Proportionality of Means, his first feature, is his graduation film.