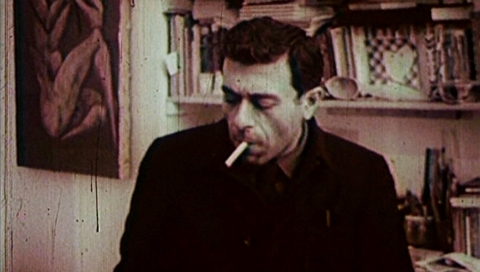 The last two months of legendary Iranian artist Bahman Mohassess’s life. This mysterious and contemporary Diogenes receives a commission by the two younger artists Rokni and Ramin Haerizadeh, after a self-imposed inner exile of nearly thirty years. Due to his untimely death, however, the work becomes his “unknown masterpiece”. 
Born in Tehran, Iran, in 1975. Painter and filmmaker, she received an art degree at the Azad University in Tehran and took up residence in the Cité Internationale des Arts, in Paris. She directed the documentary short film Just a Woman (2001) which was awarded the Teddy Awards Special Jury Prize at the Berlin Film Festival. She directed the documentary Zohre and Manouchehr (2004) and the medium-length documentary Behjat Sadr: Suspended Time (2005). Fifi Howls From Happiness is her second feature film.