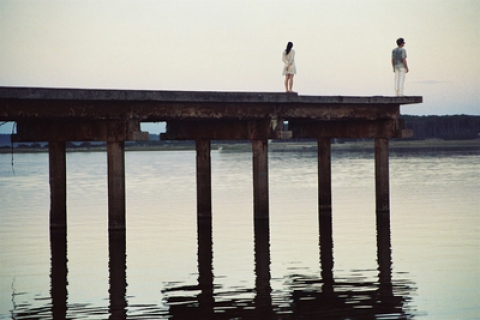 Santiago, a 30 year old Argentinean, travels to Uruguay searching for a piece of land inherited from his parents who were tragically killed in an accident a few years earlier. On his arrival in Montevideo he by chance meets Juliette, a young Belgian that came to Uruguay searching for an old love. He offers her a ride, and on the way they develop a relationship of growing affect. When they arrive in Punta del Este, however, Santiago’ universe stands between them. 
Born in Rio de Janeiro and studied cinema and literature in Boston, USA. In 2001, he lived in Los Angeles where he worked as an assistant of direction in television commercials and video clips. As an actor, he appeared in films, plays, soap operas and commercials. In 2004, he directed his first short film in Brazil, I Wanna Be Jack White (2004), followed by You Can’t Take it with You (2005, 29th Mostra). His first feature film, Beyond the Road (2010), was exhibited at the 34th Mostra.