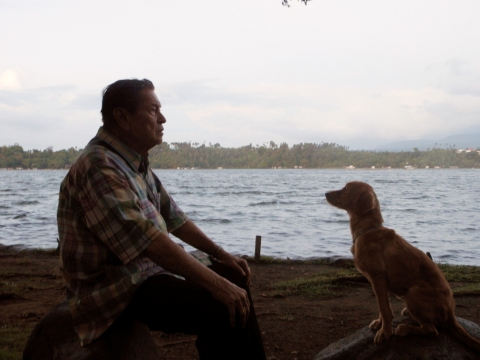 "Rene is a grumpy, aging gay man who lives alone with only an affectionate stray dog named Bwakaw to keep him company. Having only recently come out of the closet, he goes about his life constantly rewriting his will to reallocate his possessions to his ""friends"". While dodging the coffin that he bought on sale years earlier that lies in the middle of his rural home, he is compelled to confront his humanity and seek the help of others when his dog becomes ill." 
Born in Makati City, Philippines, 1972. He wrote the script for Marilou Diaz-Abaya’s In the Navel of the Sea (1998). Since then, he has directed the feature films Gigil (2006), Roxxxanne (2008), My Neighbor`s Wife (2011) and Yesterday, Today, Tomorrow (2011). Bwakaw, his fifth feature film, was selected as the official entry representing the Philippines at the Oscars.