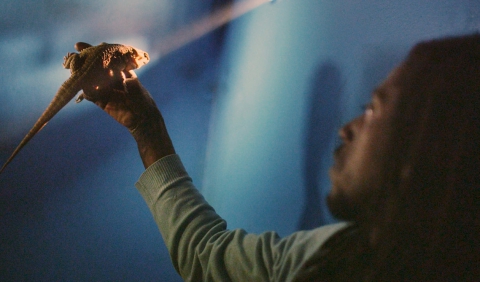 Straight out of jail, Sombra returns to his life as a drug dealer in Lisbon. In between the money he has lent and can’t get back, the money he owes, a fanciful iguana, an invasive little girl and a ringleader who begins to mistrust him, he starts to think that he might have been better off in the clink. 
Born in 1985. Swiss of Portuguese origin, his short films Nuvem (2011) and Os Vivos Também Choram (2012) were selected by the Director’s Fortnight at Cannes Film Festival. After the Night (2013, 37th Mostra) is his first feature film. O Fim do Mundo is his second feature film.