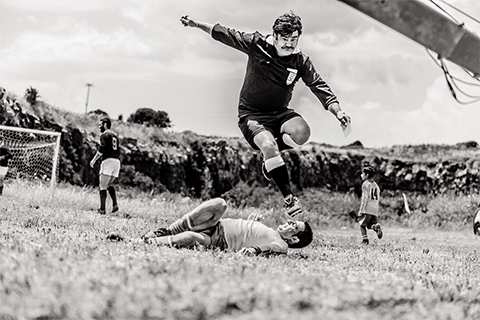 Atletico Pabarile, the worst team of the Sardinian third league, loses every year to Montecrastu, the team led by Brai, an arrogant landowning farmer. When Matzutzi, a young man who had left town, returns, the tables are turned and Atletico Pabarile starts winning one match after the other, thanks to the endeavors of its new undisputed champion. Then there is Cruciani, an ambitious referee who must deal with charges of corruption.


Born in Sardinia in 1972. After studying modern literature in Florence, he won a scholarship for the RAI School for Film and Television Writers. He earned a degree as a director at the N.U.C.T. at Cinecittà and his final dissertation was the short Banana Rossa (2005). The Referee, his first feature film, is based on his 2009 short of the same name, winner of the David di Donatello prize.