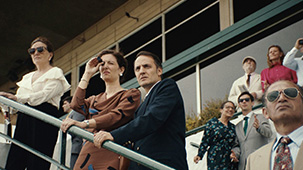 Two patients in a psychiatric institution, Tincek and Hugo, steal a camcorder movie camera from a doctor. The lunatics run away from the lunatic asylum bent on making a film: boy saves girl and, at the end, gets to kiss her. Hugo is responsible for the camera while Tincek plays the main role. The vision that they have of what a film should be is absurdly simple. Hugo and Tincek use the people they meet as actors in the production, without their realizing. Among others, they come across Magdalena, a prostitute who thinks only of suicide. In their simplicity, the two are able to discern kindness and morals concealed behind appearances where she is concerned. They offer to help her to kill herself on condition they can record her attempts on film. Only, they secretly believe that Magdalena is the damsel in distress they were looking for, and they prepare to save her from death and, obviously, to kiss her.


The Slovene director was born in 1970. He lives in the capital Liubliana and has been working as a director for ten years. He began his career making videoclips with Slovene bands. At the end of the nineties, he began to direct TV programs such as the series Odklop, on the borders of fiction and documentary. He directed various commercials before making The Last Supper, his first feature.