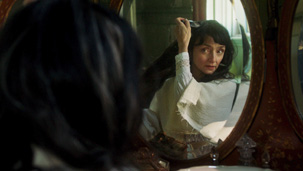 The Land of the Singing Dog

The Land of the Singing Dog

Tôyô and Yoshiko Mahiru are a couple, both of them Japanese scientists, who have never been able to have any children. Their professional projects bring them to France, to take up residence in a small bucolic village in the Jura region. Tôyô, a musicologist has undertaken the journey to find a dog that can actually sing, a rare species with a melodious bark. His wife carries out archeological research in ancient habitats, in the past, of a strong religious nature. The couple is not in the least interested in establishing contact with the local population and try to lead life according to their own tradition. Tôyô and Yoshiko arouse curiosity among the inhabitants of the small city, in particular, of young blond-haired Sylvain who begins to follow Yoshiko`s steps until he falls in love with the mysterious oriental beauty of her face and of her body. The husband realizes what is happening and sees a chance to perpetuate the Mahiru family resorting to the uncontrollable desire that Sylvain feels for his wife.


Born in 1946, in France, he began a career at the end of the sixties as a film maker. As from 1971, he collaborated with some of the great French film makers such as François Truffaut, Claire Denis, and Cédric Kahn. He directed his first film in 1974 with a short film La Plus Forte. In 1983, he made a documentary for TV Les Amoureux du Cinéma. The Land of the Singing Dog is his first feature.